Odie and the Oh-Duh! Moment

We got Odie from the dog pound. He's German Sheppard, or mostly Sheppard. We named him Odie, after the cartoon Garfield's sidekick. If it's any kind of ball--tennis ball, snow ball, basketball--you get the idea, he has to chase it. He will also go though anything that stands in his way of getting the ball. He's not too bright but he's a lot of fun. One of our kids explains this as, "Not only does his elevator not go to the top floor, there are days when that elevator doesn't get out of the basement." 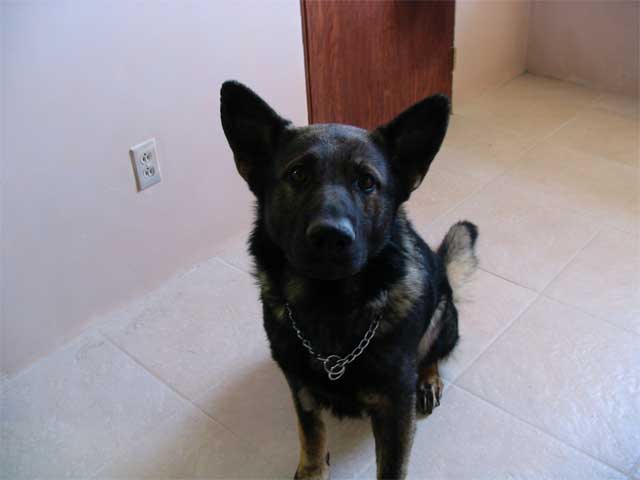 As an example, consider the brisket story. Sometimes when our little grocery store in our little town 30 miles away, doesn't have much in the way of selection, I'll buy a whole brisket for $2 a pound, cook up the whole thing and use if for a variety of meals.

One night, after slow roasting the brisket for 4 hours, I proceeded to shred the meat. I was about half-way through the brisket when Mother Nature called.

Animals are not allowed in my kitchen. Ever. We train them from the first day that the kitchen is not their space. We have a little motion detector birdie that acts as the "squealer" until they learn.

So no problem if I happen to need to go upstairs to use the facility, since there isn't one downstairs. I proceeded to do so on this particular day, without any thought of leaving a large dog within sight of a beef brisket unsupervised. Which this particular one weighed in around 15 pounds. The brisket, that is. The dog weighs in at about 107 pounds.

I came back down to finish shredding the brisket. All the meat I had shredded was...GONE! After looking around for the culprit, I see Odie curled up on the cat's sleeping pad, or rather trying to curl up on the cat's sleeping pad. He couldn't quite get curled up because his stomach looked like he was ready to birth an elephant. And he is trying his hardest to act nonchalant, as if nothing has happened, nothing is out of the ordinary. He had the same innocent look on his face like in the picture above.

Odie's eyebrows twitch up and down. He puts on his most innocent look.

Odie spends the next two days outside more than in. We could have had a methane explosion if he was around, not to mention the desperate dashes outside. He also didn't want anything to eat for the next two days. His innards were working overtime, and didn't need any additional abuse, I think.

Anymore, if I'm in the middle of something involving food, and I can't see the kitchen directly, I pop whatever it is in the oven and close the door. Just in case.

A lapidary from Canada gave me some gorgeous free form (baroque) ammolite for some help I had given to him on making a concha repousse' die. There are only a few places in the world that have ammolite. Ammolite is the opalized form of ammonite. Ammonite is the fossilized form of a cephalopod of the Cretaceous period. They looked very much like a nautilus. The opalization occurs mostly in the greens and reds, but occasional flashes of bright cobalt blue are also visible.

The one I chose to work with was a large piece. I wanted to make a setting that was in keeping with the ancient properties of the ammolite, and I wanted something to bring out the color, and balance the shape. 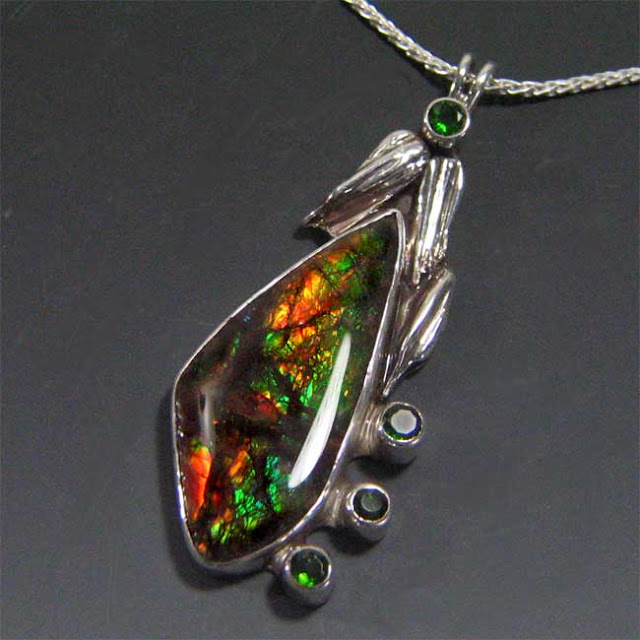 After sketching out the basic idea, I began playing with some things that might accomplish this. 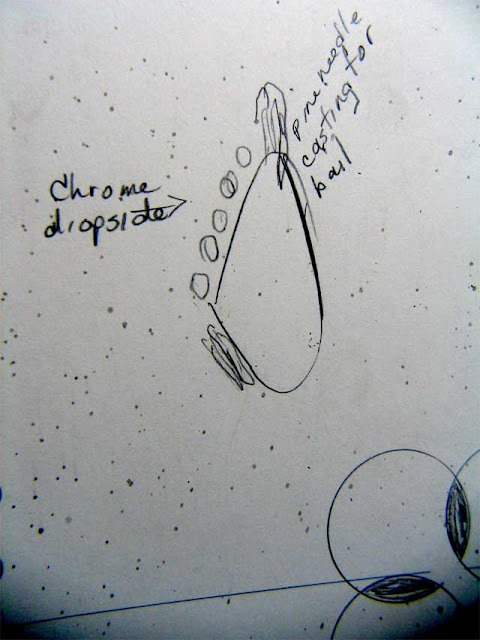 What I started with

I chose some pine needle castings for their strong linear forms and some chrome diopsides in various hues to accent the green in the ammolite. I had to make some tube settings by soldering together some telescoping tubing since I didn't have the right size of tubing. 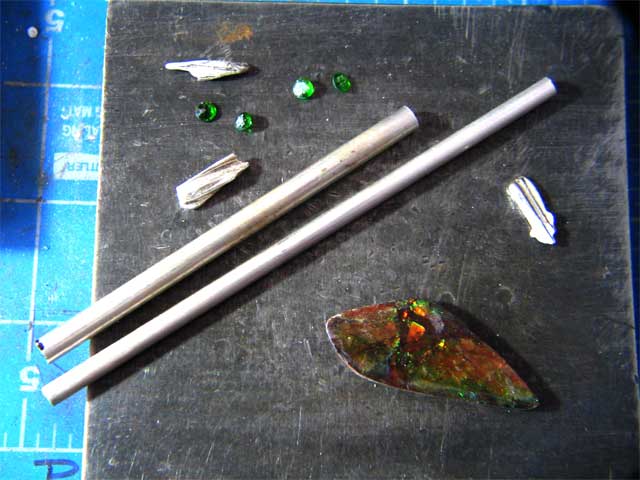 Here you see the tubing soldered together and cut into settings, ready for the seats for the stones' girdles to be cut. I've arranged the pieces loosely to approximate how the final setting will look. 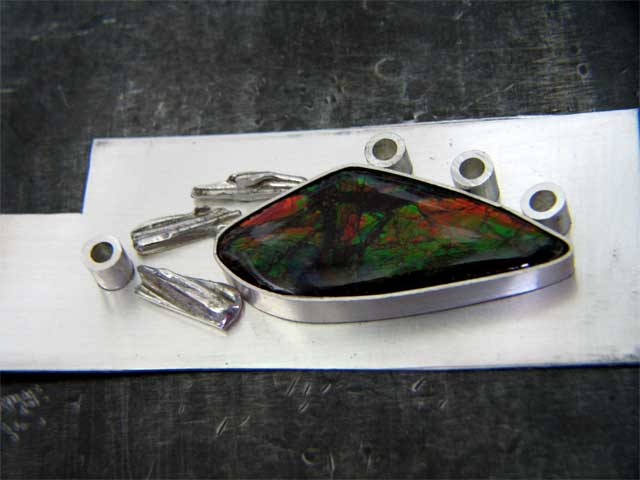 Here's the finished piece that I've put on my Etsy website. Gorgeous, isn't it? This is why I like working with pretty stones.
http://www.etsy.com/listing/84214251/ammolite-pendant-in-sterling-silver-fit 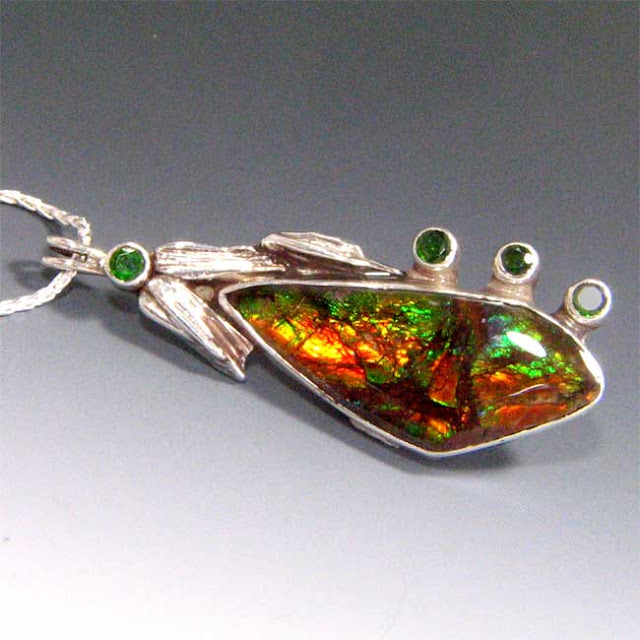 Thanks for the stones Gerry--they are absolutely lovely!﻿ (And I still think I got the better part of the deal.)

For the Metalheads--3 Steps to Cutting Tube Settings

Tube settings are really nice for setting stones, but if you're making your own from tubing, it can be frustrating. You carefully mark it, cut it, and you think you have it level...And darnit, it's not level and it's canting to the side. So you carefully sand it, taking down the high side, and it looks level until you set it on your bench block to check it, and darnit, it's still not level! You seriously contemplate buying one of those expensive jigs so you won't have to keep going through this frustration.

Well, this is the cheap and fabulously easy way to do it. First you need to get a mini tubing cutter from a hardware store. It's used for cutting small copper pipe for gas or waterline piping. They cost less than getting the #1 meal from McDonald's and you'll still have change left over.

Next mark how high your setting needs to be with a pair of calipers. You only need to mark the tube just enough so you can line up the mark to the roller wheels in the tubing cutter. 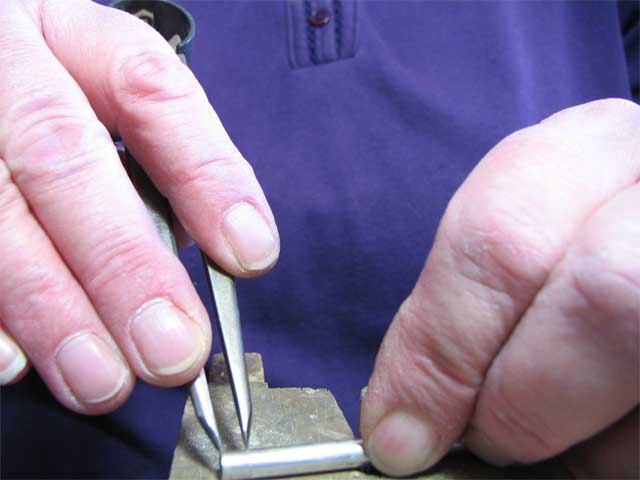 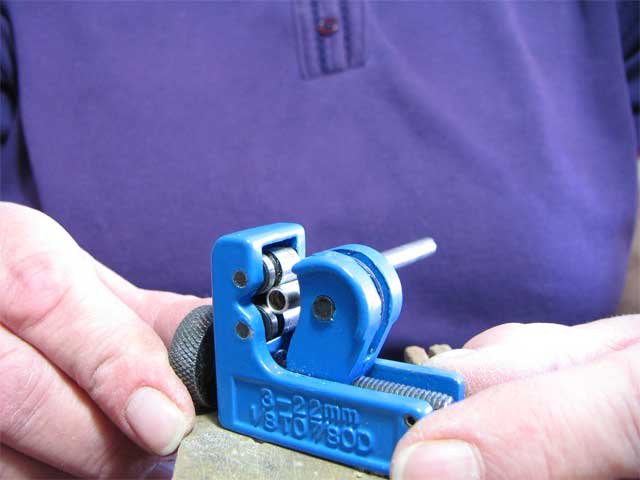 Grab the other end of the tubing with something to keep it from rotating while you're cutting. I usually use my round nose pliers. Put a little lube on the cutting wheel of the tube cutter. Rotate the cutter around the tube. As it cuts, it gets a little loose. You have to tighten the wheel by using the knurled knob every few turns to snug it up to your tubing. Keep rotating until you're all the way through. 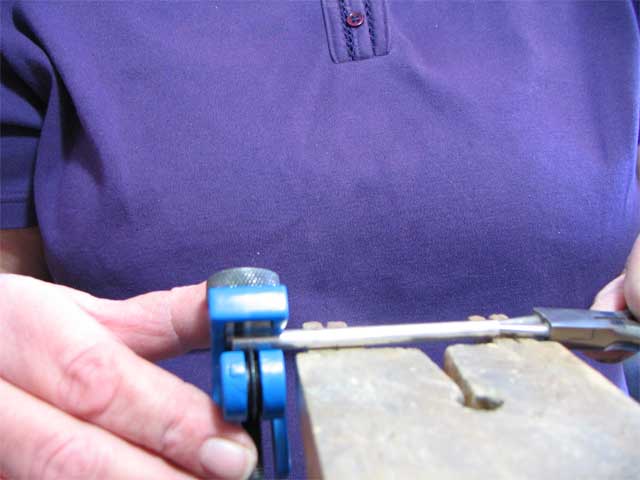 Ream the bur from the inside. I use my round pliers for this or I stick my tweezers in the end to ream out the bur. 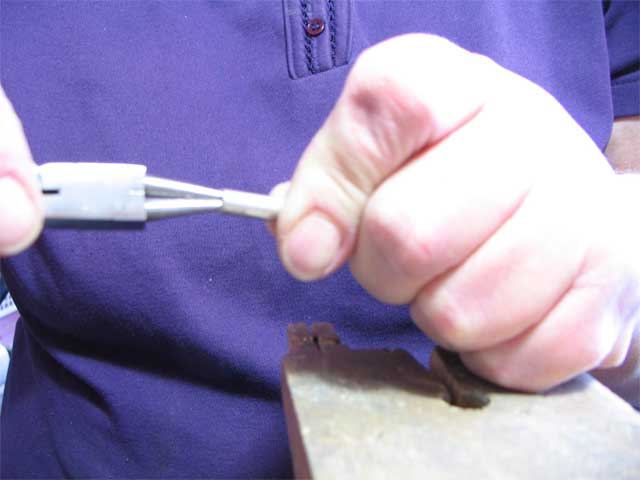 Finish by sanding the cut edge to smooth it. 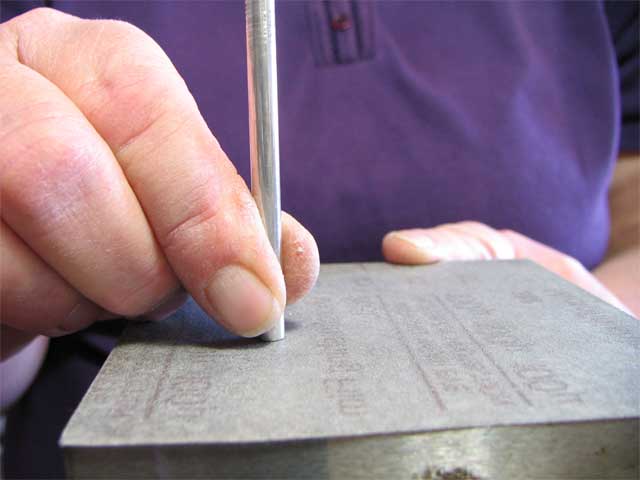 Your result is perfectly perpendicular cuts and you can repeat it exactly for however many settings you need. 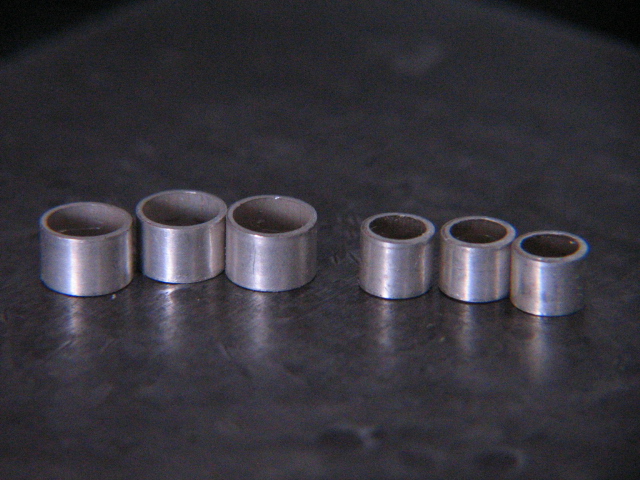 This also works for heavy wire. Although the cutter won't go all the way through the wire, it will leave you a very nice slot so you can saw it evenly. The caveat is that it won't do very short lengths for tube settings, and there is a limit on how small or large the diameter of the tubing you can use in the gadget. When your tubing gets too short to use the tube cutter, use the left over piece of tubing for a bail.

Look for other postings like this in "For the Metalheads" sections.

Everyone has their favorite cookie recipe. This is the one my family seems to like the best. If you're allergic to anything, don't eat these cookies. And yes, they look amazingly like their namesake, so best to keep the name to yourself until well after a guest has one. 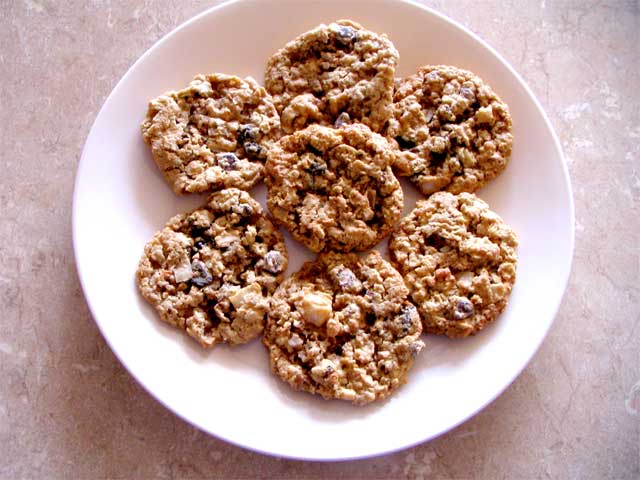 Drop by rounded teaspoonfuls on lightly greased cookie sheet. Bake at 350 degrees F. for about 10 min. until medium golden brown and they have just started to slump. Cool slightly and remove to cool completely. Makes about 10 dozen.

These store well, and can be frozen cooked or as raw dough. In the summertime I take the raw dough and press it into a cookie sheet until all the dough is the same level. Another cookie sheet on top of the dough works well to level it, as my cookie sheets have a lip and are the same size.

Then I lightly score small squares of the sheet of dough, and make a package out of 2 dozen of the squares at a time. I wrap them in that Press ‘n’ Seal, then put those stacked up into a gallon size heavy duty freezer Ziploc.

When I want some cookies, I can just take out a package and cook up a couple dozen, which is about right for after supper while I do the dishes. Because it’s fairly late at night, it doesn’t heat up the kitchen.

Posted by Katherine Palochak at 12:30 PM No comments: